I’m loving yesterday’s post from The Bliss Project on positive motivation for eating and exercise, as opposed to some of the unhealthy images we see in the media and online. She writes:

Yesterday I came across some very disturbing pictures and messages online. I’d heard of thinspo, short for thinspiration, but I had no idea how awful it really was. Girls are posting and liking pictures of emaciated young women as their inspiration. This is what they aim to look like. I refuse to post any of the pictures I saw, but some of them had messages like “I only feel beautiful when I’m hungry”, “Nothing tastes as good as skinny feels” and “Your stomach is not growling, it’s applauding”.

When I started this blog, I decided it would be my happy place. I could go on about how horrible and dangerous these thinspo photos are, and how damaging they are to young and not so young girls everywhere, but I won’t. Instead of adding to the negativity, I decided to create my own form of inspiration. Let’s call it Blisspo. I know that word makes no sense. That’s not the point.

What is the point? I think it’s about balance. I try to eat right and exercise, but I also like brownies and watching tv. Sometimes I think it would be nice to be a little slimmer, usually when I wear a bathing suit, but I work out to be healthy, not to be skinny.

So here is the first ever collection of Blisspo photos I created just for you. Enjoy and don’t take it too seriously!

She includes some great photographs of herself and others doing fun, inspirational things. I totally agree with her attitude towards health and fitness in moderation.  It’s nice to imagine a world where everyone has similar resources–role models, activities, media–that inspire them.

For example, I’ve been watching a lot of the 90s-era British television comedy As Time Goes By. It stars Judi Dench and Geoffrey Palmer as a separated lovers who reunite in their fifties. It’s a really funny, sweet show, but the most unusual thing (for Americans, anyway) is that the entire cast looks so normal. Attractive, yes, but not crazily glamourous. Nothing like the size two, spray-tanned, and hair extension’d norm of today’s soap operas and dramas. And the cast has wrinkles! Shocker!  {Also, I want Judi Dench’s cute little haircut.}

Tonight, as I settled in to watch more of Series 3, I decided to make Nigella Lawson’s Spaghetti Carbonara. Nigella is one of my favorite cooks, too. I love how she obviously enjoys food and has a sense of humor about life. For my dinner, I subbed-in my favorite pasta, orecchiette, a oval pasta shape named for its resemblance to ears. It’s the perfect reservoir for creamy and rich sauces.

My “What To Read on the Subway” column ran weekly at the Muse: 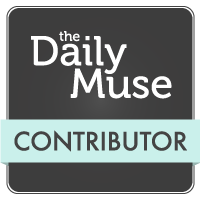